Up top: FT Hop Out in the studio

On the infamous pavement of Compton, California, a set of streets named after some of the most nutritious and delectable produce cross paths. Names like Peach Street, Fig Street, Plum Streets, and Cherry street intertwine with each other to form a section of the city known as Fruit Town. It is here that one of the most notorious Damu sets in the entire zip code arose to dominance. Adopting the Piru moniker the set was a branch of the Piru Street Boys. A gang that started in the early seventies to combat the ever growing expansion of the Crips and their tyrannical takeover. Led by pioneers Tam and Puddin many banded together under the Piru umbrella to form the first opposition to the Crips terroristic attacks. This is the origin of the Fruit Town Pirus but the legacy was just beginning to take shape and it was formed by founders like OG Momo and OG Rick James. Their names became synonymous with the notoriety of the set. Generations would grow to imitate them and claim the identity of Piru and from the roots of this tree many fruits sprang.

A new generation of Fruit Town has risen and have taken their love for their set to the music industry. Names like Compton Menace, King Hated 400, and FOP are quickly getting heard and recognized for their talents. But no one has the momentum like the up and coming street poet FT Hop Out. With his breakout 2016 smash single “I’m From Fruits”, Hop Out put himself ahead of the pack when it comes to Compton artist. With 5 million views and over 3,000 comments on that one video it seemed like FT Hop Out was on his way in 2017 to a prosperous year. But all of a sudden the troubled artist went to prison. This put a pause to his buzz and with no real project or mixtape to hold his fans over his incarceration left most wondering and waiting to hear from the Compton griot. 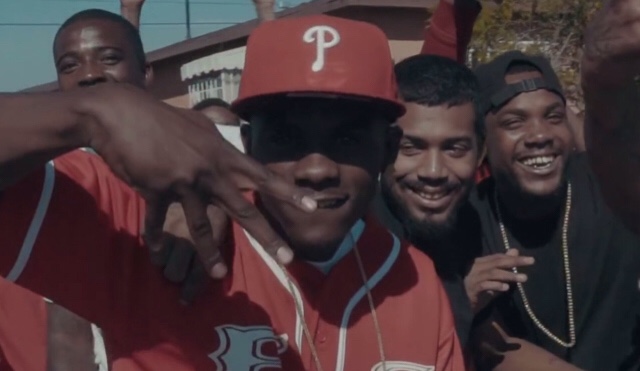 Up top: FT Hop Out at the “I’m From Fruits” video shoot

After being released last year, FT Hop Out still has some buzz to his name. Most are anticipating a long over due project and seeking new and continuous visuals from him. After dropping his first new record after his jail time on sound cloud “Raw Dawgs”, the up and coming artist doesn’t seem to have missed a beat. Doing shows and staying active has kept his name alive. Only time will tell if Hop Out will overcome the obstacles of the streets of California to engrave his name in the music industry like OG Momo and OG Rick James did with Fruit Town Piru. The question that remains to be unanswered and that everyone wants to know is a simple one. Will the Fruit from the concrete dilate his branches and grow to higher heights?

FT Hop Out – I’m From Fruits